May 07, 2010
So I am Kroger the other day picking up some groceries needed to get through the weekend. I don't usually peruse the beer aisle there normally though but they do carry a few things (some Bell's, Great Lakes, Sierra Nevada, the occasional New Holland) that strike my fancy 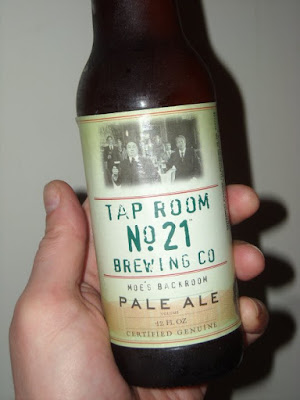 especially when they're on sale. None of the above were any of the featured deals but this pale ale was. I'd never heard of it so I was instantly suspicious of it being another megabrewery stab at trying to appear like a little upstart that somehow fought it's way on the the giant grocery store chain shelves. The bottle didn't give me any clue at all but, with being on quite a budget these days thanks to Michigan's completely tanked economy, the price was right so I figured it was worth giving it a shot either way.
Light amber in color with quite a bit of visible carbonation in the glass. The head was fizzy, had absolutely no firmness and depleted very quickly. I could've swirled the brew around in the glass for minutes on end and there'd still be no lacing also (Yes, I tried to make it happen too by doing just that). Not off to a good start at all. The aroma showed something wrong too. At it's best it reminded me of Abita's Christmas Ale (which out of all the Christmas Ale's/Winter Warmers I tried that past season stuck out in my mind to never bother trying again). That's at it's best and me being nice about it though. It actually smelled closer to a stale Labatt's Blue that some one tried to fancy up by adding a handful brown sugar to it and then filtering it through a box of corrugated cardboard.
The taste is mostly metallic, aluminum foil to be exact, with a trace of sickly sweet malt. There is a little puff of something for a second in the back end that may be hops but they taste almost artificially enhanced and disappear as soon as they appear. The aftertaste was what it smelled like.
I did some checking around on this and though the label says it's brewed in Rochester, NY the parent company is City Brewing of La Crosse, Wisconsin. I hate to bag on Wisconsin because as any reader of this blog knows some of my favorite people, music and things come from that state. I started to make a joke that maybe City Brewing was a microbrewery version of former La Crosse mass contract cheap beer brewing company G. Heileman only to find out that City Brewing IS the company that purchased the original G. Heileman brewery a couple years back.
There are some in the beer geek world that say the big breweries shouldn't be knocked for trying to make "craft style" beers because it may introduce folks to something better than they usually drink leading them to be more adventurous and trying some of the actual honest to goodness real microbrews out there. I'm cool and fine & dandy with that but if this was someone's introduction to what else is out there other than macro adjunct lagers I would not blame them if they just wanted to stick with what they can find at any given mini-mart. I've toughed my way through some beers that I didn't care for eventually finishing the 6 pack over a few weeks. This is the first time in a long time I've dumped 4 uncapped beers (Yeah, Two is all I could stand. Seeing them in my fridge kept making me shudder) down the drain. If I ever see this Moe guy in his backroom I am going to make him give back my $7.49 plus tax and deposit.
http://www.taproom21.com/
American Pale Ale Beer City Brewing New York Wisconsin