February 28, 2010
For some reason it seems in a lot of beer circles Marshall, Michigan's Dark Horse does not get the attention it deserves. One of the reason's why we've heard around the Smashin' Transistors stomping grounds is because of 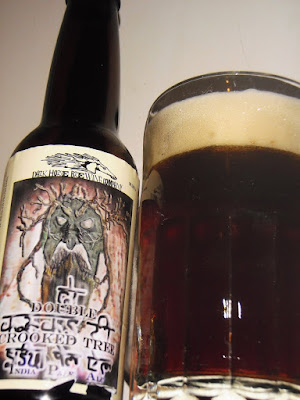 something as silly as people thinking that their label designs look too cheap and people put them off simply for that.
That's a damn shame. Sure, we won't disagree that whoever the brewery has in charge of their label art needs to learn a few things about a little more color separations and layout design but that kinda stuff takes time and costs silly money. The people at Dark Horse know you can't judge a book by simply looking at it's cover and honestly they'd rather just spend their time making the best beer that they can.
Double Crooked is very dark & rich amber in color. A shade that is almost of maple syrup really. The one & a half inch heads holds on strong and even as it melts away it doesn't totally disappear leaving a 2mm cap on top all through the beer and a good amount of spotty lacing. Amongst the rich caramel and freshly squeezed orange juice aroma's there's a campfire of maple and oak smokiness in the scent as well. What I'm noticing the most though is not much of a note of alcohol which is somewhat surprising because this pushes almost a 14% abv.
First thing noticed on tasting is how creamy this is. A lot of the high test IPA's aren't usually highly carbonated anyway but there's something about this that sets itself in a different realm as far as the usually mouthfeel. It fills and coats the tongue but more like a soft blanket that gob of burr's you get of some other double IPA's. The malts here are full on rich & cocoa-ish and take on a slightly maple tinge (which seems to be a theme running through this brew with yours truly) and hold on tight all the way through each sip but the hops aren't neglected or overshadowed-especially towards the end when the citrus comes shining through. There is a bit of warmness in the finish from the alcohol but all the through is his percentage is well hidden.
For anyone out there passing up on Dark Horse just because of their lack of pretty labels and packaging you are missing out on something very well made. Correct that as soon as you can and enjoy.
http://www.darkhorsebrewery.com
Beer Dark Horse DIPA Michigan