January 09, 2010
This is another of the limited run beers that Bellaire/Elk Rapids, Michigan brewery 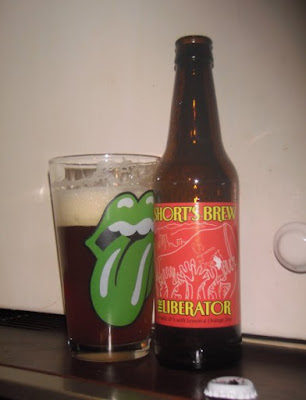 Short's released to the market last month. It's a double IPA which us here at S/T central are always up for and that it was from Short's we more than ready to pop the cap.
A very nice, rich & cloudy burnt copper color gets us even more intrigued at first glance. A very strong orangish head hangs on for quite a while. It's thick but soft. When it fade the lacing reminds one of watching snowdrift blow across the road. Man, oh Man! It's almost declared a winner on looks alone.
Talk about a beer who's scent bursts with juicy aromas as soon as the bottle was open you could already smell it in the air. Peach, green apple, tangerine, white pepper and bubble gum all seem to float through the air when giving this a whiff. All of them distinctive and very flavorful smelling and though all very pronounced not one of them stepping over the others. All one can say is "Wow!"
The scent is just a primer for the gigantic sour fruit punch the brew packs. This very full and fluffy feeling brew stokes up the tongue instantly with a straight up tang. Full of earthy zest and oily, grassy pucker power. Once again "Wow!" We're talking hop juice here. A peppery bite comes through in the middle and stands out more in the finish.
I've heard a few people have said that this is pretty much Short's turning up their Huma Lupa Licious twice as loud. It's very understandable why. There's a whole lotta flavor punch in one of them and the same kind of flavors in it hit here doubly.
http://www.shortsbrewing.com/
Beer DIPA Michigan Shorts

sanilac brew head said…
me and the wife love this. We were'nt all that impress with Shorts Ipa, though their Pa is one of the best we have tasted, but the Liberator sets a new bar for what Michigan knows about brewing beer.