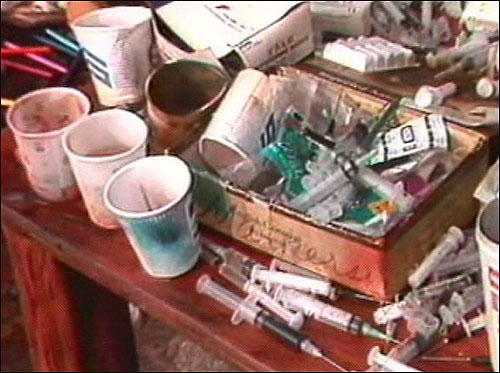 traded an older brother or creepy neighbor that buys them beer for something a bit more heavier and mind bending, Lansing Michigan's People's Temple may not have people declaring them the future of rock-n-roll but do bring much more teen snot attitude to the table than a lot of bands that are being declared "the future of rock" by clown suited college term paper writers posing as music fans.
The opener, "Out of My Hands" melds a sick and thudding Gories RnB guitar gruel with with microdotted echo causing a mess of sound wave tracers as the songs kicks and screams. It finishes not with a big ending but sounding like it completely fell apart in a matter of seconds. It's followed by "The Way It Is" which just might answer the musical question "What if the Velvet Underground did blues jams AND what if the Electric Eels did a cover of said blues jam."
Side two kicks the door open with a total 60's style garage blaster that is more akin to the way the Cheater Slicks might do one than the snoozy wannabe trad. bands that get played on the Underground Garage do. The record wraps up with the 4 and half minute space folk/ragga punk "1st Century Man" which could be taken as a sign of the apocalypse or at least whatever drugs they're on don't alway guarantee is sweet and mellow trip.
http://www.myspace.com/thepeoplestemple10
Posted by Dale Merrill