January 31, 2010
I'm really wishing for summer. Not just for the obvious reasons like sun, sand, boats & bikes either. Here we are in the dead of Michigan winter and the beers tend to 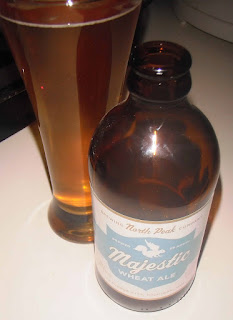 lean to the dark and thick persuasions and though some of them are the most stellar and incredible brews out there (after all this IS Michigan-the state where a place like Founders and New Holland make some awesome oatmeal stouts and what have you) but sometimes some of us get to a point of thinking "Man, we can't wait until the season is over so we can go onto the new spring and summer styles." Well, along comes Traverse City's North Peak Brewing earlier this winter unveiling three beers to the bottle market with this wheat beer being one of them.
In Smashin' Transistors previous review of their Diabolical IPA we already went over the whole cool retro feel of their bottles and label design so no need to do that already again except to mention that there's a flying squirrel on the label. Flying squirrels are always pretty cool but let's get right to the beer shall we?
Cloudy and dark gold in color which when held up to the light brings out a little sparkle from the bubbles. The initial head is about an inch this but fades fairly quick which isn't all that uncommon for American pale wheat beers anyway. The smell is somewhat earthy with scents lemon peel and grain.
Flavorwise it's very clean from start to finish. Some American brewers of wheat ales are always trying to amp it this way or twist it that way but this is just straight and simple. No need to get into any fancy descriptions of it because this isn't what this brew is about. A light wheat flavor all the through it with a slight tang, some glint of banana and a slight hop finish. The feel of the beer itself is firm but airy. Not too thick or sticky. I could see a bunch of these being drank while hanging out in a deck and basking in the sun. If you want something super fancy where every character of a wheat beer is turned up to some Nth level this wont be what you're looking for but if you want something with some nice but understated flavor that you could enjoy all day and into the evening this is one you might want to keep an eye out for.
http://www.northpeak.net/
American Pale Wheat Beer Michigan North Peak