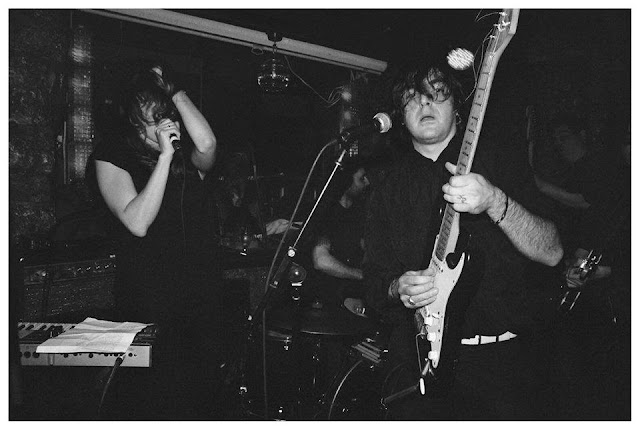 When Montreal's Red Mass first established themselves around a decade ago, I would most likely mention how the band was the brainchild of Roy V aka Choyce who was in bands such as Les Sexareenos, Daylight Lovers and the CPC Gangbangs. I would've then perhaps shared a story (the could be told on the record) of one of the adventures or experiences I had when hanging out with said bands.

I can't really do that now though. Details have faded a bit through the years. Particular points would seem almost like a lifetime ago. Such seems appropriate though as Red Mass sound doesn't really resemble the 'Reenos violent frat party riot, the Lovers red meat eatin' &a rye whiskey sippin' garage sound or the absolute RAWK action Gangbangs often kicked out (which also earn them the distinction of being one of the best live bands of their time.) Where those bands tended to bang something out from primordial instincts, in a lot of cases Red Mass is exceedingly more cerebral as well as bewitching in the way they approach particular dark corners of music.

Acting as a collective with the intentions of keeping things constantly fluid, it makes little sense to cite and compare one Red Mass record to another as, other than Roy and vocalist Hanna L Is Dead, who appears on the recordings from one occasion to another tend to be completely different. This makes each release have a common thread that runs through all of them but also has them sounding new and different than what has been heard by them before each time.

Traces agit-funk slithers its way through the choppy fuzz that drives the title track, making the listener wonder if any dancing to it should be some kind of snakelike twist or something a bit more spastic.


While that track is something that might fill the floor at a dance party I'd considered attending the other two would bum out any chemically enhanced groove ninnies (which plenty of them need to have happen to them anyway.) Erick Bradshaw of Cyanide Tooth/Maximum Ernst lends his dulcet tones and always sunny disposition to the jittery art punk of "Today I Die" while Xflanx of Brutal Knights and Dead Wife's RJ Smith sound like they're strangling each other over a gnarl of fervent hardcore on "Aggressive Tendencies."


Request guidance at It's Trash records.
Posted by Dale Merrill